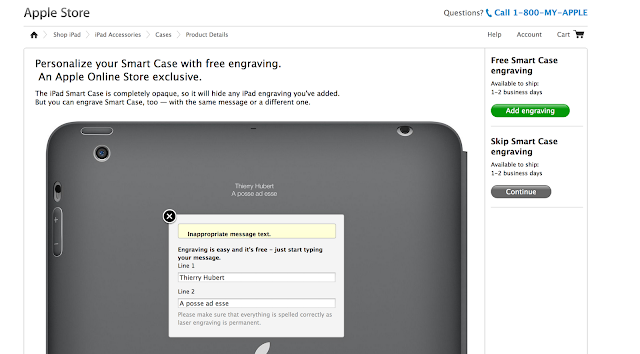 Since leaving IBM, I have become a fan of Apple computers.  It started as a way for me to expand by understanding of what the other side saw in the renewed Apple systems in 2001; And I liked it very much.  Then I realized that my PC-based friends and family members kept on calling for support about the ever-growing attacks on their PC.  All I could do to reduce the deluge, of unpaid support requests, was to recommend that they buy a Mac.  And they did... and they stopped calling.  Joy of joy, not only had I made the jump, but I convinced more than 20 people to do the same.  All are still friends today, and never blamed or cursed my recommendation.

With comfort comes the price of surrendering to a higher entity that is supposed to ensure that you remain happy.  Although still very happy with my latest MacBook pro with SSD and Retina display, I am noticing that Apple is getting increasingly sloppy and automated.  Ok we know that the Apple store employees are trained to deflect issues and criticism.  A form of mind control that is easy to see through, as long as the technology works as intended.  But when the system is failing to give me satisfaction, then I am less amused because no one, and I mean no one, can help.   Last night I wanted to engrave a Smart Case for my new iPad 4th Generation and when I entered "A posse ad esse" My engraving was rejected.   I discovered, through process of elimination that the latin word "esse" was not appropriate according to Apple's censorship algorithm.  Ironic since the sentence is latin for "From possibility to reality".  So I called the 24/7 support line to only find out the the Apple employee had ZERO authority in placing the order for me as he was also confronted by the same limitation.  As any Apple employee faced with an unsatisfied customer, he repeated what he saw on the screen, apologized and hung-up.  The problem is that my little issue is insignificant, but I have encountered similar reactions to more important and technical issues.

I do not wish to go back to Windows and the PC world.  But my view of Apple is rapidly diminishing, and I can see the day where an emerging alternative capable of allowing media and applications to migrate could create the fall of the Apple from the tree. Ouch, my head!