A New Age of Communication-Centric Collaboration Twenty years ago Lotus Development Corporation released Lotus Notes.  As one of the fortunate alpha tester and early adopters, Notes changed the way I relate to collective information and inspired my career in collaboration and social computing.  Since then  the platforms have changed but collaboration computing remains rooted in Ray Ozzie’s Lotus Notes vision.  As an extension to Ray’s view of collaboration, I created in 1996 the first social network (InterCommunity) on the Lotus Domino platform (Web server) and delivered the first Web-based community social network upon which partners could build community applications (similar to FaceBook).  The solutions we see on the Web today were understood and often existed in large enterprises as well as being available to a handful of early business Web communities throughout the ‘90s.

For the last 20 years I have also observed companies going through the painful transition of archaic email and file sharing to Wikis and collaboration solutions.  The simple fact that collaboration is stuck in application silos is deeply rooted in the segregation of process and communication tools.  When you think about it,communication and deliberation precede the formality of process, yet most information systems have it backwards and do not connect the two effectively (even if they have all the latest Web 2.0 tools).  Frankly, other than Web protocols, the core usage challenges have not changed since 1989 despite the Web’s richer applications and social computing innovations; connectivity and open source is what made the difference thus far, not the applications themselves.  As we are naturally motivated in transposing what we know over understanding the opportunities that a new environment offers, we often continue to make the same mistakes and build technologies to over-think what is natural; our innate ability to communicate and  evolve.

But now Google shows us Google Wave.  Not since my introduction to Lotus Notes twenty years ago have I been wowed with innovation in that space.  Google Wave truly rethinks communication streams and collaboration as it should be with today’s connected world.  Google did not reinvent the wheel, they just proved that it a sphere.  It is perhaps too server centric for  my taste, but it  is just a matter of time before the model can be truly internet-based instead of mainframe-like.  Nonetheless, Google Wave’s API does open new ways to incorporate content, applications and structure in the stream of human communication in real-time.  Lotus Notes first version had some very basic features that made it possible to build solutions that promoted collaboration and content distribution, as well as  access control, replication, forms, views, scripting language, mail and later Web standards.  With these integrated basics developers created applications that exceeded Lotus‘ expectations.  Google Wave’s core architecture has the building blocks, openness and a framework based on today’s Web computing reality that will allow the user and developer community to marvel us with their clever use of Google Wave.  The communication-centric framework of Google Wave is simply brilliant and users will gradually embrace its many features as well as enrich their use through third-party plug-ins.

I have read the more skeptical and critical press on Google Wave.  In my opinion they have short memory and grossly under estimate what Google is doing to the Web with this truly new paradigm.  Facebook and other messaging technologies need to think about ways to connect and leverage Google Wave or they will be left in the dust by its user community.  As to the critics who claim that the UI is too complex for every day users... I would like to add that if you survived and supported FaceBook’s user experience, Google Wave will not be a problem.  This is not your father’s Web so get with the program and compute with passion and intelligence.  We are about to discover new ways to have a return of investment for all the time we wasted promoting ourselves on the Web 2.0.  Isn’t it time for something new?


I see Google Wave as new platform capable of creating a much needed movement to revive business opportunities and bring new players to the Web.  I also feel fortunate that the Darwin Awareness Engine brings a solution to the information overload that Google Wave generates.  If history repeats itself, Google Wave’s composition is destined to succeed.
Posted by Unknown at 11:12 AM No comments: 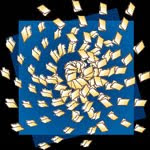 Recent surveys and research show that executives finally value social media favorably to improve relationships with customers and build their brand (“Social Media: Embracing the Opportunities, Averting the Risks” paper from Russell Herder). Paradoxically, these same executives fail to embrace these technologies within their organizations to improve productivity through better collaboration, idea sharing, faster initiative adoption and, of course, knowledge capitalization. The reason for this can be attributed to the many past failures of Knowledge Management (KM) and collaborative technologies that were assaulted by armies of consultants and system integrators over-thinking communication empowerment. Today we know that most KM initiatives have failed due to exaggerated efforts to harness tacit knowledge into explicit processes. Having spent most of my carrier in the space of KM, collaboration and social technologies since 1988, I can testify to how many times the Web 2.0 in the enterprise was adopted under different names; Groupware, Shareware, Communication Intranets and others...the bottom line is that they all aimed at improving communication during work-awareness.

Let me expend on work-awareness. Work-awareness in state of mind where the individual is focused on his/her activity and driven by accomplishing the task at hand. If a company is able to empower the individual with communication and information discovery tools, then the information being captured is likely to be rich in relevance and valued as a sharable asset for others. Many power-blogger and micro-bloggers (Twitter) practice this concept to make their knowledge valuable for personal gain and knowledge acquisition. This is an observable phenomenon that companies can use to improve capturing knowledge from their workforce as well as empowering them to share this knowledge to solve problems and improve productivity.

Now back to the bad rep of KM and earlier versions of the Web 2.0. KM, like the early efforts of artificial intelligence, is a noble cause rooted in predictability and measurements that can rival the best structure data analysis. The reality is that the data source is messy and very human. As such, emerging movements and personal interpretations are more meaningful than a well defined empirical dashboard. Basically it requires a human being to extract value from this corpus of unstructured data.

Most of my readers know I have been developing a Web 2.0 awareness technology (Darwin Development Corporation) for the last two years that can can extract relevance out of the chaos of unstructured communication. I was a keynote speaker at the Enterprise 2.O conference in Montreal, Canada last week. Since the conference, I have been exposed to many Canadian companies who are struggling with making sense of their communication platform as they are exploring the implementation of Web 2.0 solutions. After every demonstration of Darwin’s Awareness Engine these companies were amazed at the technology’s ability to aggregate and correlate meaningful information on one screen; one called it “The dashboard of our voices” and an other said “I can finally make sense of what is going on without endless meetings.” Needless to say, we are now discussing the best way to implement Darwin’s Awareness Engine in environments that have only emails, Lotus Notes/Domino, Sharepoint and others with proven Web 2.0 solutions. I look forward to harvesting what they have in their legacy communication tools to show them that the value of collaboration is not about the platform you choose (the standard now), but instead it is about the knowledge hidden and captured during work (the future).

Posted by Unknown at 5:55 PM No comments: 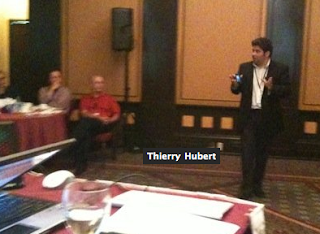 I gave a presentation last week in Montreal at the Allar-Hervieu event; “Votre entreprise est-elle 2.0?”. Of course, it was in French and I was pleased that it attracted some of the more important Montreal-based public and private companies.

Over 75 executives, with extensive experience in the importance of collaborative computing and the emerging impact of Web 2.0 technologies, were present at the event. This was a breeze of fresh air as many such conferences are occupied by Web industry enthusiasts looking for networking opportunities and prospects. Not this time! This time the communication firm Allar-Hervieu of Montreal targeted the right audience with the right message.

The presentation was made by 3 speakers delivering a logical story-line that addressed the positioning and reality of the emergence of the Web 2.0 in the enterprise, the use of content-capturing technologies and the need for thoughtful communication plans through concrete examples. and lastly how this chaos of information can be best consume to help the enterprise measure the pulse of what is happening through organic correlation and emergence ranking in opposition to complex portals, popularity ranking and KM tools.

This event was our first open product demonstration. I used live examples relating to the audience's organizations... Hydro-Québec, H1N1 trends and Canadian news events. The Hydro-Québec live demonstration was particularly relevant since it outlined a current controversy about donations to private schools. Our technology was able to show the formal media perspective in contrast (and correlated) with social media citizen contributions. Additionally, we also noticed that the Hydro-Québec debate was clearly francophone-driven as a contrast of 1 to 10 was visible when tuning the linguistic preference.

This demonstration of correlated aggregation of emerging sources originating from the formal and informal demonstrated to the audience the potential for organizations to benefit from this technology within their intranet as well as linking them to the Web.
Posted by Unknown at 6:29 PM No comments: